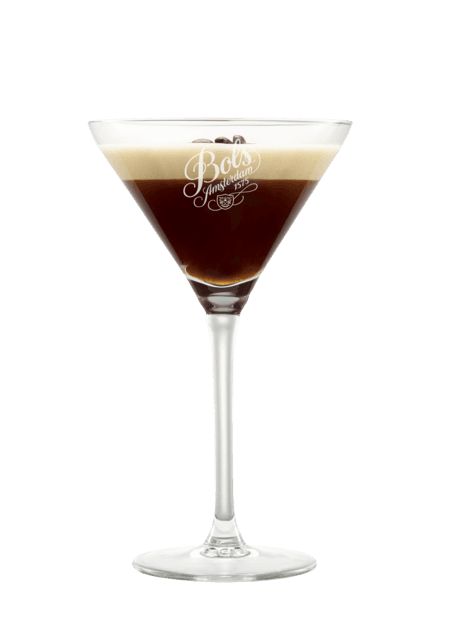 unlocking
the original
spirit     of
amsterdam

Pour all the ingredients into a cocktail shaker and fill it with ice cubes. Fine strain the Espresso Martini into a into pre-chilled martini or coupe glass. Garnish with three coffee beans.

The Espresso Martini is one of the most popular cocktails of this moment! The combination of Bols coffee liqueur, Bols vodka en cold espresso makes the perfect after-dinner drink with a good caffeine kick. It's easy to create at home as well!

The Espresso Martini is a cocktail with a double kick. One kick from the vodka and another from the freshly brewed espresso. These two powerhouses are joined together in harmony by the Bols Coffee and sugar syrup. This makes the Espresso Martini an endlessly fascinating drink.

The coffee cocktail was first invented when Dick Bradsell (a legend in the cocktail world who died last year) was asked by a young supermodel (often thought to be Naomi Campbell) while working behind the bar at Fred's Club in London in the 1980s to create a drink ‘to wake me up and f*ck me up’. The Espresso Martini, a cocktail of vodka, coffee liqueur and espresso, did just that. The drink, originally called a Vodka Espresso, quickly became an icon and to this day, remains the most popular coffee cocktail and a staple of after-dinner drinks worldwide.